As of late I have grown to love reading the Psalms, and the one in particular that has become my favorite is 73. My love for this Psalm was only increased when I had the opportunity to study it in depth for my Old Testament class and found an amazing structure within the order of the Psalm. Below is some excerpts of the paper I wrote as well as a diagram of the structure I found. If anything doesn’t make sense or you are just curious about more of Psalm 73, feel free to ask me about it. I’d love to tell you about all the things I have found and grown to love!

“Psalm 73 in particular is a contemplative Psalm that deals with the struggle of the path of the wicked and their perceived end, contrasted with the path of the Psalmist (the righteous) and his perceived end, and the conclusion that follows from understanding the reality of the matter. The Psalm focuses on the problems found in the “heart” of the Psalmist, with the word “heart” being used 6 times in the 28 verses. For the Hebrews, the heart was not so much the seat of the emotions (for them it was the bowels); rather it was very much like our idea of the mind. The “imaginations of [the] heart” are spoken of (7), and Asaph struggles both with his heart being embittered and being pierced in the kidneys (the mind and the emotions) in verse 21. Finally, God becomes the strength of his “heart” (i.e. mind) even though it fails. So the Psalm may be called a wisdom Psalm, dealing with problems of the mind, although it follows the pattern if a thanksgiving Psalm in some ways.

The structure of the Psalm is where it is shown to be masterfully and beautifully constructed. The three main separations are from 1-12, 13-17, and 18-28, and are made based on the introduction of the Hebrew word “hak” (translated in the NASB as “surely”) at the beginning of each unit. This breaks the three major thought units into:

1) the unjust prosperity of the wicked,
2) the troublesome contrast of Asaph’s righteousness and his suffering,
3) the proper perspective of God in each person’s path.

This is the most generally accepted analysis of the form of the Psalm, which then is often broken down into smaller sections that vary among authors.

Yet there seems to be a deeper level of structure that paints a vivid picture that Asaph was trying to convey in this Psalm. The three main divisions remain, but there is parallel structure that forms a reverse chiasmus in a way. It resembles a person entering a house and observing the different rooms in one way, and upon entering the final room and exiting the house in the same fashion, the rooms are viewed in a much different light, and the foundation stands clearer than ever. (The structure is diagramed below)

The foundation of the Psalm is the indisputable claim that God is good to those who are pure in heart (1). But then the doubt of the author is shown in his near stumbling (2-3), after which the first statement is further shrouded by the perceived prosperity of the wicked (4-12). Then the second section (13-17) is Asaph pondering the things of the first section (1-12) and being troubled by such a sight (with the added trouble of his own suffering in spite of being righteous). But all of this changes when he comes into the sanctuary of God (17). Then, upon revisiting each of his first three ideas, he sees that each is consistent with the foundational statement made in verse 1. The wicked are destroyed (18-20), he was ignorant in being envious (21-24), and the good given is God Himself (25-28), and thus his “heart” is set to rest in the refuge of God (28).

The conclusion is that the first statement of God’s goodness to the pure in heart is indisputable because the good is the nearness of God; it is proved and described by the rest of the Psalm. The journey of Asaph’s “heart” can be seen from the struggle with apparent injustice to the understanding of true justice given by God, wherein the wicked is properly dealt with and the righteous receives his just reward: the nearness of God. There then is hope in spite of the darkness and though the heart of the righteous may fail, God is his strength, portion, and good. Because of God’s nearness, Asaph has every reason to “make the Lord God [his] refuge / That [he] may tell of all of [His] works.” 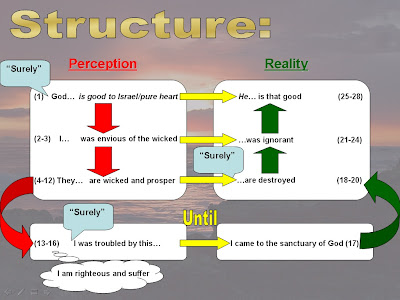 Sorry its kinda fuzzy, I still havn’t figured how to make it clear. I can send you a non-blurry one if you would like — just ask.
2 Comments
Share: