The Redemption of War

March 18, 2011
More and more, one of my favorite passages (and images) is from Revelation 21:5 – where God is shown as saying from the great white throne: “Behold, I am making all things new.” The idea that God has redeemed us and will one day redeem this world is a beautiful picture. I love the concept of new creation, and it has become something I see all over Scripture now. I get excited when I read the poignant vision of the future in Revelation when all things will be redeemed. But sometimes it is hard to see that today, in our everday life. That’s why I am particularly encouraged when I see signs of “God’s new creation being brought to pass in the here and now” (to borrow N.T. Wright and Robbie Crouse’s language). When I see tangible glimpses and tastes of this world being redeemed, particularly in the realm of the arts. 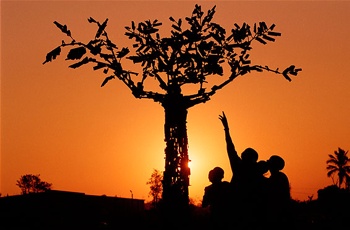 Two works of art have encouraged me lately. The first is a sculpture in The British Museum, that was funded by Christian Aid in a project called Transforming Arms into Tools. The sculpture (pictured below) is the Tree of Life made entirely out of decommissioned arms which were used in the 17-year civil war in Mozambique. The project gives people useful tools (ploughs, bicycles, building materials, etc.) in exchange for their weapons, then in turn gives the weapons to artists from Mozambique who create works of art with them. I think that is a beautiful picture of redemption happening in the here and now – a bit of new creation creeping into our world through the God-given talents of people.

The other picture I’ve seen is the story told by one of my favorite guitarists: Trace Bundy. His latest album released is called “Missile Bell,” which has a cool story of redemption behind it. During the civil war in El Salvador, there was a small village made up of 18 families that had to evacuate their homes and live in refugee camps because of the devastation of war. Upon returning later (with the help of an organization called Agros, which Trace supports) they began to rebuild their homes, but decided to first rebuild their church so that they could hold a service of thanks. When they finished, they didn’t have a church bell, so they looked around to see what they could use – and the end result was that they took an old shell of a missile that was left over from the war. That missile became their call to worship at the church from then on. The article on Trace’s album puts it this way:

“Their missile-turned-to-bell speaks to the power of redemption: ugly become beautiful, dead things alive, old things new. Trace took that image and wrote a song called “Missile Bell” playing ugly, dissonant chords in a way that becomes harmonious. He plays it as a proclamation of peace and a testament to the villagers in El Salvador.”

If you buy the album (and I’d encourage you to do so), the artwork depicts this story – so you can follow along as you listen to the song. It is another beautiful picture of new creation coming from the destruction of sin and evil. An image of God making all things new, even the instruments of war and chaos.
My hope is that I will be doing this same thing in my life and my work and my passion. That I will be an agent of new creation in this world right now. That I will bring a taste of the age to come in my music or my teaching, in my writing and my speaking, and in the everyday details of my everyday life. My hope is that you will do the same.
I would also love to hear about other examples of this that you have seen/heard. Anyone care to share some with me?
1 Comments
Share:

Purpose in the Pain