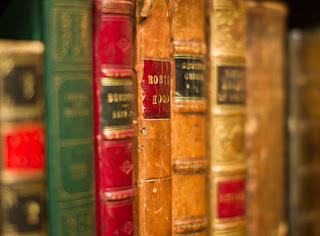 I enjoy reading books. I tend to be a pretty frugal person – but there are two things I can easily spend a lot of money on: music and books. That’s why Amazon is a dangerous place for me. Recently, I’ve tried something that may curb my spending on books. I joined two groups that send you free books if you just post a review about them on your blog and on another website. So you’ll start seeing some reviews of books from time to time. The only problem is that you appear to start off as a bottom feeder in the selection of books you can review at the beginning, and have to work your way up to books you actually want to read. In light of that, I figured it might be good for me to start periodically posting a list of books I’ve read that I found particularly interesting or insightful. During the semester, that’s going to be primarily seminary books, but this summer I will have some more freedom.

So to start things off, here’s a list of 10 books I’ve read in the past year or so that really stuck out to me (in no particular order):

– C.S. Lewis: A sort of spiritual autobiography of C.S. Lewis, chronicling his journey from atheism to Christianity. Lewis does an amazing job of simply putting you in his mind and has a way with words to paint vivid pictures. I especially found the description of finding “joy” quite riveting, and his exposition of this in one of the last chapters really opened my eyes to joy (in the way he understands it) – see my post on that here: Lewis on Joy. Great book – but seriously, pretty much everything Lewis writes is a must-read.

– Peter Leithart:  Liethart, a Presbyterian minister, writes against what has become known as “Christiantiy” in our American culture, and tries to point back to a more historical and biblical Christianity. His critique is written in short, essay-like chapters and clips – which makes it a quick read and keeps you moving forward to read more and more. This book really made me take a harder look at my Christianity and my understanding of the sacraments and ecclesiology of the church. Leithart has a way of writing and seeing the world and Scripture that hits home with me on multiple levels.  I really enjoy reading his insights on his blog: www.leithart.com

– Jon Krakauer: A journalist’s look at the life of a college grad who went off into Alaska on his own and ended up dying there. I typically read mostly theology, but after my surgery (while I was in the hospital) a friend brought me this book and I ate it up. If you’ve read anything by Krakauer, you know that he weaves historical journalism with a specific story and does so beautifully. I won’t say much more about it, so as not to ruin the story, but it’s a fascinating look into the mind of Christopher McCandless. Apparently, there is a movie made from it, although I can’t say how good it is.

Let the Nations Be Glad!

– John Piper: This is a book I read for my missions class at DTS, and Piper does a great job of giving a biblical foundation for missions. Perhaps the most well known quote from this book comes from the first chapter: “Missions exists because worship doesn’t.” Piper goes on to demonstrate from the OT and NT that missions is about having “all the nations” worship God as supreme together, and that becomes the fuel for sharing the good news. Definitely recommend this if you have a heart for missions.

– Dr. & Mrs. Howard Taylor: Another book I read for my missions class at DTS. I’ve started to really appreciate reading Christian biographies (and even biographies in general), since they really do inspire you to live like these great men and women before. What struck me most from reading this account of Taylor’s missions to China was his single-mindedness and his focus on what he intended to do with his life. Taylor was set on China from a very young age, and was driven to share the gospel with them – so he oriented his whole life for that goal, and because of that he had great success. That made me really think about what was my goal and what I was doing to pursue it with passion. I definitely want to read more biographies (I’d suggest these from what I’ve read already: Jim Elliot, Cory Ten Boom, Taylor Hudson, C.S. Lewis, Jonathan Edwards).

Jonathan Edwards and the Ministry of the Word

– Douglas A. Sweeney: I’ve always wanted to read more of Edwards, since he is considered one of the greatest theologians America has ever produced. Getting an idea of his historical background really has helped me to see his reading in context. Sweeney does a good job of putting flesh to Edwards and giving the reader a broad understanding of his life and works. This is all I’ve read on Edwards, and it’s certainly not exhaustive (more of an introduction), so I can’t say it’s the best (but it was suggested to me by Dr. Hannah, who knows his Edwards). I have been told that Marsden’s works on Edwards are excellent, especially his Jonathan Edwards: A Life

(which is significantly longer than Sweeney’s work). Highly encourage anyone to read what they can on (and by) Jonathan Edwards.

– St. Athanasius: One of the definitive works on the incarnation of Jesus Christ – definitely a great read for those interested in the topic. It’s surprisingly short too, and a quick read for the most part. Athanasius, an early church father, writes an orthodox response against the heresy of Arianism, and does so with a beautiful exposition of the incarnation. One of the things I found most insightful was how he linked the creation of the world through the Word (Jesus) to its redemption needing to be re-created by the original creator (the Word), thus the need for the second person of the Trinity to become incarnate in Jesus. If you’re interested in Christology or the Trinity, I would recommend reading this book.

The Reason for God

– Timothy Keller: If you want to suggest a book to someone who is skeptical about the Christian faith, I would definitely suggest this title to you. Keller does a great job of approaching faith in the God of the Bible from a reasonable standpoint. This is an excellent book for a number of reasons: 1) Keller speaks as a pastor in NYC who has dealt with each of the questions he addresses in this book, beginning each chapter with a quote of someone he has spoken with in his church. So this is not merely a academic treatment of belief in God – it is highly pastoral. 2) Because of this, he doesn’t arrogantly assume that the evidence for the God of Christianity is an unquestionable slam-dunk. Neither does he assume that if intellectual difficulties are gone, then belief is inevitable – he understands there are often personal difficulties with Christianity that trump reason. But 3) he is extremely well read (and philosophical), and as such does an excellent job of handling each of the questions he brings up with great reason. His chapter on forgiveness was greatly beneficial for me, personally (see my post here: Forgiveness as Death & Resurrection). I cannot say enough about this book for believers, skeptics, and non-believers alike. Highly recommended!

Evil and the Justice of God

– N.T. Wright: This is a great and down-to-earth book written by a stellar New Testament scholar who really knows his stuff. A great combination of a book that is easy to read for the common layperson, but is backed by someone who is well respected in academia and has done his homework with excellence. One of the things I appreciated about Wright’s undertaking of the problem of evil was that he makes a point to stress that it is a problem. He doesn’t downplay the difficulty that evil gives us in this world – he doesn’t dismiss evil as “not a big deal.” He recognizes evil for what it is and the pain in brings through the suffering of countless people. But because of that demonstrates the great justice and victory of God as he defeats evil in the person of Jesus. Much like Keller’s book, Wright’s chapter on forgiveness (“Deliver Us From Evil”) was very insightful and beneficial for me personally on understanding how there can be healing and restoration in light of evil that affects us individually. A great read if you’re interested in evil and how God has dealt with it.

A Million Miles in a Thousand Years

– Donald Miller: This is my most recent read, and I got this book for free at a pastors conference here in Dallas a little bit ago after I heard him speak on the story of Joseph. I have to be honest and say that I was a bit skeptical of Don Miller and wasn’t sure what I was going to think of his book. I read Blue Like Jazz when it first came out (again, because I got it free), and really enjoyed his writing style and the way he told stories, but was a bit skeptical of his theology. Miller is a great storyteller, there’s no doubt about that – he brought the story of Joseph to life at the pastor’s conference, but I was still skeptical as I read his newest book. Surprisingly, I really enjoyed it – and even read it within two days. The book is all about story, and since Miller is so good at telling stories, he does an amazing job of bringing life lessons as he tells how his understanding of story has impacted his life. It’s a really interesting and quick read, so I won’t share any more about it – but I would recommend it to you, as there are some great insights that Miller makes from how stories work.

So there it is – the first of my Reading Reviews (perhaps I need to come up with a better title in the future). Since my summer is fairly free and open for good reads, I’d be interested in hearing of any books that you’d suggest I put on my reading list for this summer.