For those of you who have not heard, I started my third round of chemo this week. With that comes some good news and some bad news from these past few weeks.

The good news: my CT shows that my tumor has not grown at all since my first scan before starting chemo. That means the chemo is working – which is encouraging, in a complicated sort of way as I expressed it my last post. They said that it would be reasonable to hope for more stability and perhaps even improvement (i.e. the tumor shrinking) by my next CT scan after Round 4.

The bad news: I was supposed to start Round 3 last week, but my ANC counts were low again, so they had to push it back another week. Unfortunately, because this has been consistently happening, they decided to just change my rounds from 3-week rounds to 4-week rounds so that I don’t get my hopes up every time I go in on week 3 and have to keep pushing it back again. This means I will have at least another 4 more weeks of chemotherapy, and instead of finishing around the end of this year, my treatment will run through most of January of next year – which is discouraging.

On top of that, I’ve noticed that I’m feeling a lot more tired as the rounds have gone on, and tend to sleep more than when I’ve started. For example, I slept at least 13 hours yesterday, and that didn’t include my afternoon nap. I’ve started to almost depend on a 1-2 hour nap in the afternoon because of how tired I feel each day. Although anyone who knows me knows how much I love and enjoy sleep, and especially love and enjoy naps – this constant fatigue and need for sleep have been very frustrating to me because of a feeling that I’m in a sort of limbo right now. It feels like all I can do is sleep, eat, and work (sometimes) – then just repeat the same thing over again the next day. And I’m getting more and more worn out, and it feels like I’m getting further and further behind each day. Now with the added 4 weeks on my treatment time, I’m beginning to dread more time in this limbo state.

It feels like I’m just trying to survive, and not getting anything productive done.

To be honest, I hate the feeling that I’m not being productive. I have been learning how much I tend to idolize productivity and performance in my own life, even if my idea of productivity is different than much of the world’s ideas. I don’t really care about money or becoming “successful” in the traditional American understanding of success. But I do find that I have a deep-seated need for people to respect me – primarily as a “good Christian.” This need has been intensified by my attending seminary (in my mind, “school for how to become a super-Christian”) as well as this unshakable urgency in my heart to enter pastoral ministry (in my mind, “the job that super-Christians choose”). So if I’m not moving towards becoming a super-Christian, then I feel like a failure in other people’s eyes – like I’m not being productive or performing well.

I’m 30 years old, and by now I have friends who are teachers and preachers and pastors and seminary professors (or literary professors, who obviously aren’t as spiritual as seminary professors, but still are better than non-professors), or are successful business people or engineers raising godly families and involved in church and growing and doing all of these productive things with their lives – and here I am in a state of limbo just sleeping all the time. I haven’t even technically graduated from seminary yet. This last year I was working towards an internship at two different churches overseas which would have been seriously productive (because let’s all be real here, if being a pastor is a class-A super-Christian job, then being an international pastor is the highest of super-Christian alpha-dog jobs out there – I mean, that’s a combination of missionary and pastor!)  Instead, this year has spiraled into a game of survival on many levels – a sort of static running on the treadmill and actually losing ground instead of going further up and further in on my journey to Christian perfection.

It seems like my last bastion of hope to keep up any appearance of being productive and retaining my image as a super-Christian is writing posts on this blog. So each week I feel like I need to write a post to keep up some semblance of productivity in my mind, or at least in the minds of others.

Instead, I just sort of sleep… 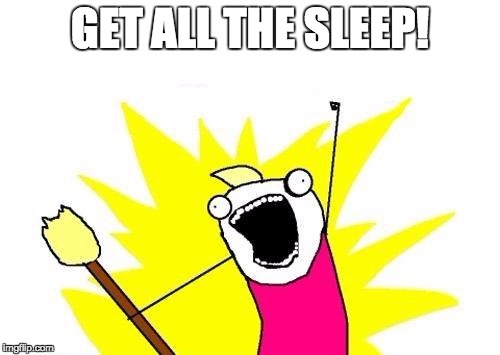 So I’ve been doing a lot of thinking about sleep. Or at the very least I’ve been practicing a lot of sleeping – which makes me a semi-expert on the subject, I guess? You could call me a pro-sleeper. I know many of my friends would agree to that label before chemo – if only they could see me now, though. Unfortunately, we tend to not be very impressed by people who sleep a lot. In fact, we’re almost more impressed when people can get lots of stuff done on less sleep than we even admit is healthy – we think they’re super productive people. We don’t need sleep or rest. America is actually the only advanced economic country in the world that does not require employers to give their employees any paid vacation or paid holidays (see this article from Forbes). In my current job, I get no vacation and no sick time until I’ve earned it the previous calendar year, and I’d need to be with the company for 5 years before I can get a full 3 weeks of vacation (which is about the average minimum amount required for most other countries for all their employees starting the day they are hired).  And that’s not even taking into account that many Americans don’t even use half of the vacation they earn.

So is sleep productive? Is rest productive? Is vacation productive? Should I feel like I’m just wasting my time because I spend so much time sleeping and resting? Honestly, sometimes I feel like a big baby with how much I sleep (and it doesn’t help that I’ve lost my hair and beard so that I now have the added appearance of a baby-face). Babies are the least productive members of our society. They basically just eat up the time of their caretakers and make them less productive. Everyone knows that parents of a newborn are just expected to be doing less for a while, and especially sleeping less.

But I don’t have a newborn baby – I actually act (and now sort of look like) a baby. So what do I with this abundant need for sleep?

“He Gives to His Beloved Sleep”

“It is in vain that you rise up early
and go late to rest,
eating the bread of anxious toil;
for he gives to his beloved sleep.”

It is odd that God designed it so that one-third of our adult lives are spent sleeping – being completely unproductive. Babies and children sleep even more, and yet no one ever gets mad at them for sleeping too much, we actually appreciate it because it gives us time to catch up on sleep (all you mothers should be nodding here and saying “amen, brother Jason! Preach it!”) No one in their right mind gets frustrated at a 6-month old for not helping around the house with the chores. No one expects a toddler to contribute to the family budget each month. I wonder if God as our Father looks at us in a similar way, but we’re just too proud to accept it.

I get so worried about accomplishing things and being productive for the kingdom of God all the time, and God’s not even the least bit worried. He actually delights to give “to his beloved sleep.” He enjoys when we are completely unproductive. Perhaps he designed it that way to remind us how abundant his overflowing life is, even as we sleep. In my Hebrew class when we translated this passage, my professor pointed out that a better translation of that last phrase might be: “for he gives to his beloved in their sleep.” Not only does he delight to give us sleep, but he delights to give to us in our sleep. How ironic that in our least productive time God is over-abundant and gives to us when we can do nothing other than receive?

So my incessant need for constant sleep has been a good reminder of just how little God needs my “productivity” to build his kingdom. Sleep is deeply humbling. It means that the world still turns without me for the 8 (or 13, or 24-48) hours that I sleep any given day. God actually is probably better off and accomplishing more when I’m asleep than when I’m awake and feeling particularly productive in whatever I’m endeavoring to do at the moment (even perhaps in writing this post).

A Feast that Swallows Up Death